The new home of the Department of Operations Research and Financial Engineering (ORFE) and the Center for Information Technology Policy (CITP) was dedicated on April 4, 2009 in honor of the late John J.F. (Jay) Sherrerd ’52, one of Princeton's most active, devoted and beloved alumni. 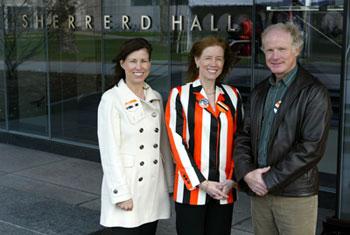 As strong winds rattled the tent near Sherrerd Hall where members of the University community, friends and family were gathered, patches of blue sky appeared overhead. “The sun is shining for Jay,” said President Shirley M. Tilghman.

Describing his attachment to Princeton -- “which was nothing short of legendary” — she referred to his loyalty, illustrated by attending 55 consecutive Reunions, and to his numerous contributions, including 20 years as a trustee, tireless efforts on behalf of Annual Giving and generous material gifts. He was “a man who has been fittingly described as ‘Princeton’s quintessential Tiger,’” she said.

The crowd at the dedication included Sherrerd’s daughters, Susan Sherrerd, a 1986 alumna, and Anne Sherrerd, a 1987 graduate alumna, and son, Jay Sherrerd Jr. Speaking on behalf of the family, Anne described her father’s commitment to Princeton and pointed out that many gifts during his lifetime had been made anonymously or in honor of friends or his class. He was long reluctant to have his name appear on a building, she said, but had acquiesced to the naming of Sherrerd Hall, in the hope that seeing the name would inspire others to remember that every individual has the potential to make a permanent, positive difference in the life of the University.

“Sherrerd Hall is not only a generous gift from Jay and his family,” Tilghman observed. “The research pursued behind its beautiful glass façade, at the intersection of engineering and the social sciences — research that is at once innovative, practical and collaborative -- reflects Jay's lifelong interests and values.”

Sherrerd died after a long illness at his home in Bryn Mawr, Pa., on April 9, 2008, at age 78. He studied economics at Princeton and earned an MBA from the Wharton School of the University of Pennsylvania. He co-founded Miller, Anderson & Sherrerd, a Philadelphia-based investment management firm that is now part of Morgan Stanley. According to his family, he was fascinated by the application-oriented research conducted by ORFE faculty and students, particularly as it related to finance.

ORFE focuses on helping organizations such as corporations and government agencies to optimize performance while reducing exposure to risk, while CITP brings researchers in computer and social sciences together to study policy issues related to emerging digital technologies.

The building is located in a neighborhood of engineering school and social sciences buildings, including the Bendheim Center for Finance, where 10 members of ORFE have joint appointments.

Architect Frederick Fisher, principal of the award-winning Los Angeles firm Frederick Fisher and Partners that designed Sherrerd Hall, spoke about it at the dedication ceremony. “The ethos of the building is clarity and connection,” he said. “It’s all about relationships.” It was designed to harmonize with its environment, sharing its modernist cubic style with the neighboring Mudd Manuscript Library and Friend Center for Engineering Education, and reflecting not only their brick façades but also the natural context of trees and sky in its mirror-like surface.

The design also was intended to highlight human relationships. The main entrance opens on a three-story atrium with café-style seating that the architect dubbed the “town square.” The main stairway climbs through a glass enclosure that juts out from the façade, giving views of both the interior and exterior. Rising through the stairwell is a sculpture commissioned for the building, with lights and mirrors that reflect brilliance in all directions. The lighted stairway is like “a lantern of knowledge,” said Fisher. “People can come here at night and see how this building glows from within.”

During the dedication ceremony, Tilghman recognized two other Princetonians who are honored in Sherrerd Hall. The Bradley M. Zankel '06 Student Lounge is dedicated to the memory of a young man who died while he was an undergraduate, and the Janet Morrison Clarke '75 Classroom honors an alumna who, among many other contributions, co-chaired the Anniversary Campaign with Sherrerd.

Following remarks by financier John Bogle '51, husband of Sherrerd's sister Eve, the ceremony concluded with "Old Nassau," led by Sherrerd's granddaughter Alexandra Arader, a 2008 alumna, and a rousing tribute by the University Band.

The Ellen and Leonard Milberg Gallery, named for Leonard L. Milberg '53 and his wife, was dedicated at Firestone Library on February 26. The Milberg Gallery will showcase world-renowned pieces from around the globe.

Members of the Princeton community gathered on Oct. 3 to celebrate the dedication of Rivers Way, the roadway that enters campus from Nassau Street between Firestone Library and the Andlinger Center for the Humanities.

The Thomas-Graham Reading Room, located in the east end of the first floor of Firestone Library, was formally dedicated on Oct. 3.  Lawrence Graham ’83 and his wife, Pamela Thomas-Graham, provided the gift that refurnished the space, part of the decade-long renovation of the 71-year-old Firestone Library.