Fire upon the cannon

Look for flames rising jubilantly on Cannon Green and Tiger cheers roaring from spectators when Princetonians gather around a Big Three championship bonfire at 7:30 p.m. on Sunday, Nov. 21, to salute football victories over rivals Harvard and Yale. 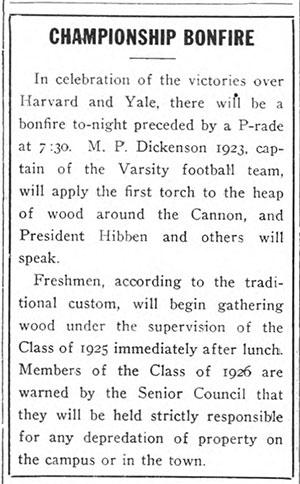 The entire 2021 bonfire can be viewed here.

First held for Princeton baseball victories in the 1800s, the bonfires became associated with the autumn season as football became more popular. According to Princeton Athletics, the 1889 football team, led by All-America quarterback Edgar Allan Poe, defeated both Harvard and Yale on their way to a perfect season — giving birth to a tradition that received its own chapter in football history during the 150th anniversary of the sport. Since then, there have been some 20 recorded events, including a stretch of seven from 1950 until 1966. The most recent football bonfire was held in 2018.

Archival film footage depicts some of the excitement from the infernos of 1923 and 1986. A silent, black-and-white movie captures the carting and building of the 1923 pyre. The Class of 1986 created a video yearbook that lets alumni relive the 1985 season’s bonfire.

Originally it was the job of freshmen to gather the needed wood and kindling (later crates, fences, and even row boats and pianos), but at the most recent bonfire in 2018, all four undergraduate classes helped build the pyre.

The bonfire is a revered, if sporadic, tradition when Princetonians bask in an orange glow that warms hearts for years to come. Enjoy “goin’ back” to these highlights from previous bonfire celebrations.

For those unable to come to campus, you can watch the bonfire via live stream beginning at 7 p.m. on Sunday, Nov. 21. Watch the live stream.

It may be chilly in November but the 2012 bonfire warmed Princeton students ringing Cannon Green in celebration of the football team’s victories over Harvard and Yale.

It may be chilly in November but the 2012 bonfire warmed Princeton students ringing Cannon Green in celebration of the football team’s victories over Harvard and Yale.

1901: Freshmen students scavenged the campus and town to gather materials for the bonfire.

1948: The kindling is traditionally marked with references to Princeton's dearest rivals.

1985: Students watch the fire from the trees.

2006: Before cell phones, preserving the moment.

2013: President Christopher L. Eisgruber ’83 saluted the football team from a platform behind Nassau Hall. “A raw, cold November night like this one always puts me in the mood for a bonfire,” he told the crowd.

2013: Banners of previous bonfire celebration years connected the 2013 event to a special legacy.

2018: Preparations for the 2018 blaze included students spray painting Princeton’s school colors and messages for their rivals on wood pallets.

2018: Vice President for Campus Life Rochelle Calhoun congratulates the Princeton football team on its undefeated season and thanks the team for bringing the University community together.

In the second year since the public launch of Princeton University’s Venture Forward campaign, a new video series, “Making Audacious Bets,” focuses on faculty and alumni who are asking big “what if?” questions and bringing the unknown within reach through imagination and collaboration.

Princeton University will enhance its groundbreaking financial aid program, providing even more generous support to undergraduates and their families as it works to attract talented students from all backgrounds.

Thirty years after a seminal meeting of Princeton’s leadership, the University’s promise that the environmental humanities would find their place alongside the environmental sciences and engineering has come to fruition as the fast-growing, interdisciplinary area of research and instruction has become an established strength at Princeton.