It was the summer after his junior year, and Mark Pavlyukovskyy ’13 found himself in a hospital bed in Paris, recovering from a mysterious illness that he had contracted while teaching children in a remote village in Ghana. He was in the hospital for a week. When it became clear that he would get better, he used the time in bed to reevaluate his priorities. He thought about his future and how he could have a positive impact on people’s lives.

“That whole experience made me realize that I wanted to help people in a scaled way, not just individually,” said Pavlyukovskyy.

Technology tools, he thought, and the confidence to use them, could empower people all over the world to take charge of their futures and participate in the global economy.

Back on campus for senior year, Pavlyukovskyy, a molecular biology major, enrolled in computer science and machine learning courses and learned to code. In his Scully dorm room, he began building a basic computer kit that children could assemble themselves.

He kept working on it after he graduated from Princeton and headed to the University of Oxford to pursue a PhD in machine learning with a focus on cancer imaging.

He and his business partner tested the computer kit with children in Kenya and India. “They really loved the whole experience of going from a box of parts to a fully working computer,” he said.

But when kids in England and America tried it out, they asked if they could use it to play Minecraft, a popular computer game that enables users to build castles, bridges, and cities with virtual blocks.

Calling All Future Engineers and Inventors

That insight led to the Piper Computer Kit. Designed for ages eight and up, Piper provides a fun way to learn basic computer programming, electronics, and engineering skills while playing their favorite game.

In 2014 Pavlyukovskyy put his PhD on hold and moved to San Francisco to work on the start-up full time. 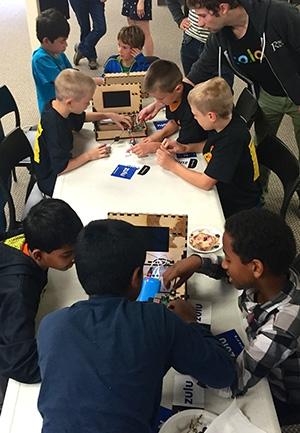 The Piper kit comes with more than 100 parts and a blueprint. Children put together a wooden box to hold the computer, and then assemble the machine, learning about electronics and problem solving as they work. When they play Minecraft on Piper, they have to build gadgets—like a switch that opens a hidden door—to progress in the game.

More than 100 elementary schools around the country have incorporated Piper into their curriculum for third and fourth graders, and Pavlyukovskyy and his team—which includes Tommy Gibbons ’13—are developing a more advanced curriculum for students in fifth and sixth grades.

“We are encouraging the next generation of inventors and creators by fundamentally changing how kids learn about and understand technology,” said Pavlyukovskyy.

“Fifteen years from now, kids who played with our computer kit are going to say, ‘I became an engineer or I invented this thing because I built Piper and it was empowering.’” More than 15,000 Piper computer kits have been purchased by families around the world.

Princeton’s Alumni Entrepreneurs Fund provided a big boost to the start-up company by awarding Piper $50,000 in seed funding as well as advice from two alumni mentors—Peter Briger ’86, a principal and co-chairman of the board of directors of the Fortress Investment Group, and Gordon Ritter ’86, a founder and general partner of Emergence Capital Partners—and help from Mung Chiang, Princeton’s Arthur LeGrand Doty Professor of Electrical Engineering and inaugural chair of the Princeton Entrepreneurship Council.

“Running a company can be challenging,” said Pavlyukovskyy, "but it feels great that I was able to dive into something completely unknown and, with help from Princetonians, stick with it until it worked. Our mission is to empower the inventors of tomorrow so that more kids create rather than consume technology.”

For information on supporting entrepreneurship at Princeton, contact Jane Maggard, associate dean for development, engineering and applied science, at jmaggard@princeton.edu or 609.258.6850.

What began with Lou Chen ’19 and fellow undergraduates giving violin lessons to Trenton high school musicians has evolved into a comprehensive music and arts program that has united the Princeton and Trenton arts communities.

Steve Marcus ’10 is inspired by both teen winners and alumni volunteers for the Princeton Prize in Race Relations.