Standing up for Truth and Justice 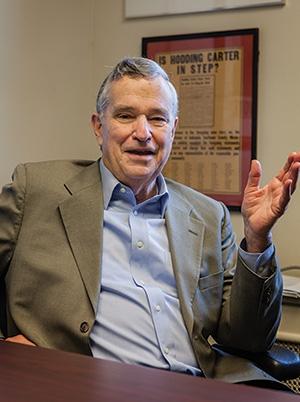 The “eureka” moment that set W. Hodding Carter III ’57 on course as a journalist and activist came as he walked out of a sophomore-year economics class.

“There’s a major connection between Greenville, Mississippi, and New Delhi,” Carter remembers thinking. His education, he realized, gave him a sense of his place in the world.

After several years in the military, Carter spent 17 years as a writer and manager for the Delta Democrat-Times in Greenville, where he spent a lot of time in the hot seat for his pro-civil rights editorials. He then shifted to government service for several years with the last eight months as President Jimmy Carter’s State Department spokesman during the Iran hostage crisis.

After Washington, he turned to broadcast journalism and racked up four Emmys and an Edward R. Murrow award. A stint promoting journalism and the arts at the Knight Foundation preceded teaching public policy at the University of North Carolina. The skills he needed for all these careers—to be an observer, critic, and commentator, Carter says—were honed in Princeton precepts wrestling ideas with faculty members’ “great minds.”

Carter has had the opportunity to watch his alma mater evolve during 15 years as a University trustee, and from the sidelines through one of his children, Catherine Carter Sullivan ’80. In another pivotal moment, facing a sea of faces in McCosh 50 to give a talk after Sullivan graduated, Carter marveled at the transformation before him, from the homogeneity of his campus years to a diverse crowd representing “folks from all walks.” “It’s been a long, hard process of change,” he says, “not a casual change for Princeton—and at the end of the day that makes it all the more impressive. Princeton has gone from the outstanding college it was when I attended to a world-class university.” 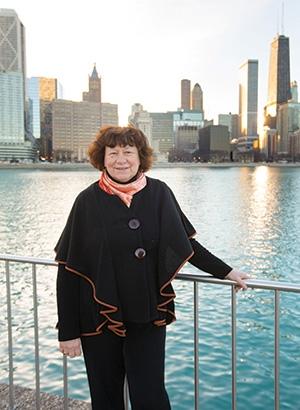 Being a pioneer is not easy, but it galvanized one of Princeton’s first women undergraduates, Carol Obertubbesing ’73, with a sense of purpose.

Professionally Obertubbesing has promoted outreach and education for public radio and television and been a communications and public relations consultant. Today she continues her nonprofit work as president of the Woodstock Folk Festival where she tries to build community through music. She also has welcomed Princeton newcomers to her adopted city, Chicago, as a mentor for Alumni Corps/Princeton Project 55 since 1993—“a window through which I get to see another Princeton,” Obertubbesing says.

It almost didn’t turn out that way. During freshman year she struggled academically, and socially found it difficult to make female friends since she was often the only woman in her classes. She even considered transferring. But an English professor—Ann Wood, now Columbia University Professor Emerita Ann Douglas— changed all that.

Obertubbesing recalls going to Wood’s office and finding her engaged in a lively conversation with history Professor George Forgie. They invited her to join them. “They treated me as an equal. My opinion was important. It was the first time I felt I belonged.” Her Princeton years, during the Vietnam conflict, were a time of national upheaval. Obertubbesing teamed up with her future husband, the late Michael Epstein ’71, to support the Union for National Draft Opposition. This work, plus involvement in Princeton’s newly organized Women’s Center, became “a thread that goes through my life, the reason I got involved with serving Princeton alumni and the broader community.”

Because Princeton made an impact on their lives, Carter and Obertubbesing have committed to supporting Princeton now and in the future. You can, too.

While he didn’t know him personally, Daniel Schwartz ’72 has reflected on the former University president’s leadership qualities — and wants to encourage them in future Princetonians.