Whether meeting as roommates, study project partners, in the gym, or after walking through FitzRandolph Gate, there’s no telling when a chance encounter will lead to a romantic relationship or an abiding friendship.

For Valentine’s Day 2022, we wondered: Who is your Princeton Valentine? In honor of the holiday, several alumni shared their most treasured Princeton connections. 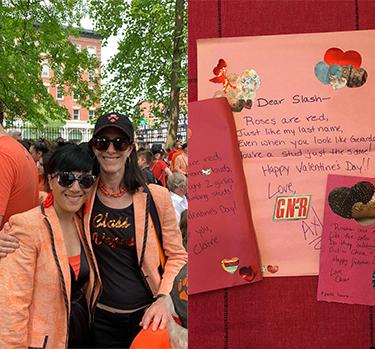 Since our freshman year (1990-91) my Princeton roommate Claire Brown ’94 and I have written each other Valentine's rhymes, evolving from construction paper and glued magazine cut-out hearts to texts and emojis. She even sent one to me in Wuhan, China, when I was there on a Princeton-in-Asia fellowship. Always variations on “Roses are Red” and always topical, our rhymes ranged from dressing up as Guns N’ Roses for Halloween sophomore year to living in our current pandemic. Amazing that we are now in our fourth decade of Valentines! —Susan Fou ’94 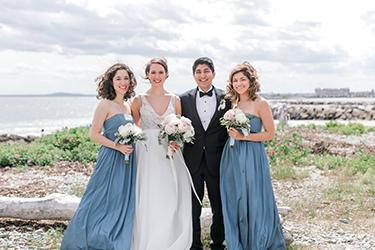 In September of 2010, Aneesh Sahni ’14, Christina Healy ’14, Sarah Sifuentes ’14 and I met in our first ’zee group meeting on the 4th floor of the Forbes Addition. We all quickly became inseparable, from movie nights and study groups to countless trips to the Wa. Aneesh and I also began dating in November of freshman year (a risky move at the time for the friend group!). Despite moving to different cities after graduation, we remain the best of friends. We visited each other in new cities, reunited at Reunions when Aneesh proposed in 2017, and Christina and Sarah were my bridesmaids when I married Aneesh in 2018. I couldn't have asked for a better group of people to have in my life, and am forever thankful for Princeton and Forbes — which is always worth the walk. —Elizabeth LaMontagne Sahni ’14 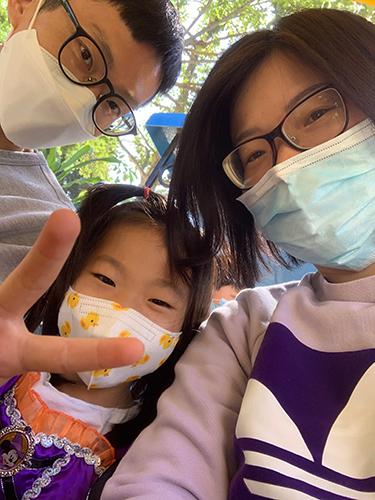 I met my husband, Wenjie Jiang *12, while we were both graduate students at Princeton. I spent most of my time at Forrestal Campus, and he spent most of his at the E-Quad. After our graduations, we moved to San Francisco; however, we got married at Princeton in 2012. We have a 5-year-old girl entering kindergarten now. We planned to take her to visit Princeton for Reunions when she was 3 years old. Due to the pandemic, that trip never happened, but it is still our plan. This year marks our 10th anniversary! —Yuanyuan Fang *10 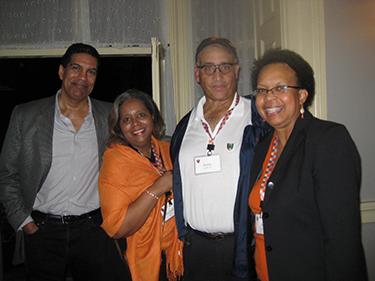 I met Teresa Trussell on the first day of freshman year. She’s attended my weddings and the birth of my only child, and has been an unofficial godmother to my daughter. Although we don't talk daily, or monthly, whenever we are able to get together, it is as though the years did not pass. Time seems to stand still on our friendship such that we can resume our friendship as if there was no interlude whenever we’re together. She is one of my oldest and dearest friends. We’ve shared heartbreaks and joys, prayers and inspiration across the miles. —Gwendolyn Waring ’77 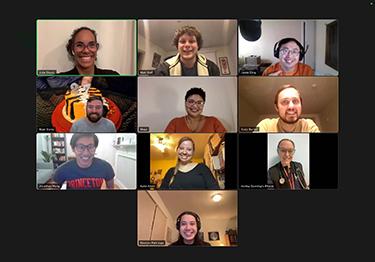 Since the beginning of the pandemic, we have gathered on Zoom on Thursdays (first weekly, now every other week) to check in with each other, provide encouragement and support, and toast one another as we used to do at the Princeton Quadrangle Club’s weekly pub nights. This mix of Princetonians from the Great Classes of 2011, 2012 and 2013 have celebrated two years of birthdays, Reunions, Halloweens, New Year’s Eves, and impromptu costume parties all while dialing in from nine states spanning four time zones. We even wrote this together on Zoom! Happy Valentine’s Day, Tigers! —Julia Blount ’12, Matt Goff ’12, Jamie Ding ’13, Ryan Corey ’12, Maya Reid ’12, Cody Burton ’12, Jonathan Wang ’12, Katie Knorr ’13, Ashley Dunning ’11, Brenton Partridge ’12, and many more — there’s always room in a Quad Zoom! 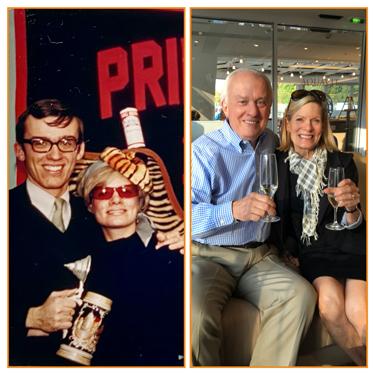 Karen Wallin and I went to the same high school in suburban Chicago but we had never met. Being two years apart in a very large school meant social distancing! However, she had dated the boy who lived next door to me in high school. Violet, his mother, was the reason I came to Princeton, her having challenged me to look beyond my desire to attend MIT. Saturday morning March 1, 1969, during sophomore year at Princeton, Violet called and told me that Karen was attending a workshop at the Princeton Seminary and perhaps I should check to make sure she was OK. Well, one did not say “no” to Vi!

I walked the short distance from Henry Hall to the Seminary and began searching for someone I had no memory of. Eventually, I spotted her name tag, walked up and said, “Vi says hi!” Once I explained who I was, the surprised look on Karen’s face relaxed. I was invited back to have dinner with the whole group. Afterwards, Karen and I continued the mealtime conversation and found our way to the lounge of the building where we’d had dinner. It was daylight when we realized that we’d talked all night and perhaps it was time for a break. Snow had fallen outside unknown to us and set a beautiful landscape for the start of a romance.

Last June, coincident with the 50th Reunion of my Princeton class, we celebrated our 50th wedding anniversary. We were married two weeks after graduation in 1971. Karen saw me through Stanford grad school, we traveled the globe during her time with Pan Am, raised two wonderful and accomplished women, and are now enjoying retirement and time with the grandkids.

The photo I enclosed is a “before” and “after.” The image to the left was taken in March 1969 during Karen's visit to Princeton, and the one on the right is from a celebratory cruise we took before the pandemic. —Alan Usas ’71 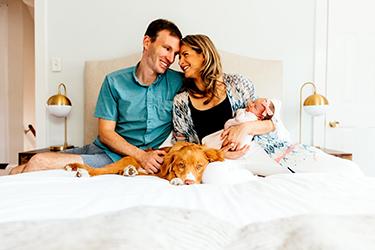 While Alex Renaud '09 and I originally met at Princeton (Class of 2009!), it wasn’t until 9 years later that we got together — first, we bumped into each other at Reunions and then shortly after, we attended a fellow Tiger’s wedding in Hawaii. Having our first dates in Maui was pretty enchanting and after about a year or so of long-distance dating, we got engaged. We had originally planned a wedding at the Princeton Chapel, but Covid altered our plans and instead, we got married in a spontaneous wedding on the beach in May 2020. We now have added a pandemic puppy and baby to our crew and we’re eager for an overdue Reunions celebration, hopefully come May 2022! —Jessica Sheehan ’09 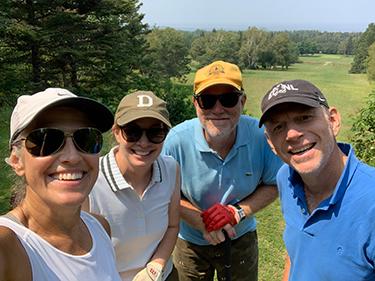 I met my Princeton husband (Brian MacFarlane ’86) when I was hanging out with one of my new fellow freshman pals, Tommy MacFarlane ’88. When Brian walked in, I didn’t initially believe they were related, since Tommy had a full head of red hair and Brian had…less. But we got to know each other and wherever Brian was, mischief and fun seemed to follow. We started dating in spring of 1987, and when Tommy started dating another classmate and friend, Kathryn Hayward ’88, at about the same time, it seemed like kismet. Thirty-five years later, “the core four” are all still married, in-laws to each other, aunts and uncles and godparents to each of the other couples’ beautiful 3 daughters, and try to spend as much time together as possible! —Leah van der Voort MacFarlane ’88 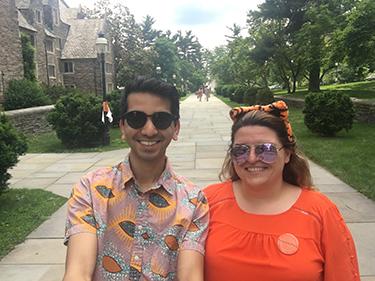 One of the most precious gifts from my time at Princeton is my friendship with Angela Bardes ’10. We met on the first day of orientation, at Forbes College, and have been inseparable ever since. Angela is my constant, she is my person, through good and bad times. I was immediately drawn to Angela's caring nature: she immediately notices anyone who might be feeling discomfort in the room, and she uplifts that person with care and thoughtfulness. At Princeton, we both recognized in one another a person who has learned to code-switch in spaces of privilege. In a highly competitive environment, we became each other’s lifeboats, checking in to make sure we were okay. And while we can be critical of Princeton sometimes, we know that our friendship could only be forged in the best place of all.

Throughout the years, we have laughed together and we have also at times become upset at one another. I am so grateful that we encouraged each other to learn and grow as people, that we remained present and attentive throughout. Today, Angela is a highly beloved English teacher at Millburn High School, where she has created new curriculum such as a seminar called “Post-Colonial Literature,” to challenge and enlighten her students. Angela, I am so proud of you and so grateful to be your friend! —Waqas Jawaid ’10 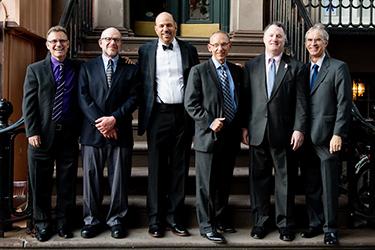 I established many wonderful, lifelong friendships at Princeton, especially with my roommates. I lived next door to Tom Hastings ’79, David Kalinski ’79 and Jim Kastelman ’79 in Laughlin during freshman year and we formed a quad in Campbell sophomore year. We then added Brian Jaffe ’79 and Bob Zucker ’79 and lived in a six-person suite in the much-underrated New New Quad for both junior and senior years: I nicknamed it the 121 Lourie Love Club. We (three doctors and three lawyers among us) have remained close friends since, adding spouses to the group, and seeing kids grow up. Since the pandemic began, we've been having regular biweekly Zoom-togethers, adding friends Rick Joosten ’79, Ricky Revesz ’79, and John Parkinson ’79 to the conversation. (Photo is of the six of us at my wedding in New York City in 2013). —Lonny J. Behar M.D. ’79 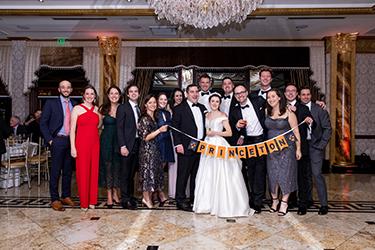 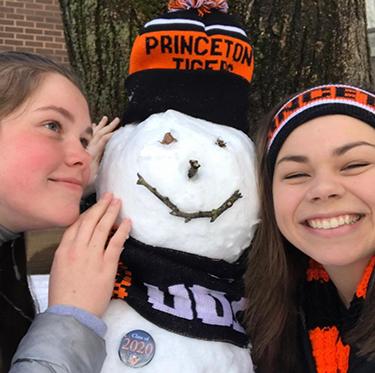 Aoife Bennett ’20 and I met on our CA trip and realized we lived a floor apart in the Forbes Annex. We quickly became friends and bonded over Uno games, ECO100, and Bob’s grilled cheese. For the next three years we were roommates and even studied abroad together in Oxford! Even though we live in different cities now, I can always count on Aoife to make me feel loved. —Dayna Valek ’20

David Card *83 and Joshua Angrist *89 have been awarded the 2021 Nobel Prize in economic sciences for providing “new insights about the labor market” and showing “what conclusions about cause and effect can be drawn from natural experiments.”