Douglas Chin ’83: The First Generation Lays the Treks for the Next

Twelve-year old Douglas Chin fiddles with his Radio Shack aviation band radio and aims it out his second-floor apartment window until it picks up snippets from the control tower at JFK Airport. On his desk nearby, the plastic model DC-10 he pieced together in between helping customers downstairs at his mother’s laundry is almost dry.

The work day had been long, and the heat, beastly. But it was worth it, because his favorite customer came in. The friendly Pan Am pilot had picked up his pressed uniform and handed Doug some Boeing 707 flight manuals, which Doug now pores over on his bedroom floor as JFK’s flight communications crackles from his radio. Suddenly, a familiar voice comes across the airwaves: “Clipper 707, two three zero, Center on 132.45... Goodbye, Douglas.” As the air traffic controller puzzles over the transmission, Doug smiles.

In his 2018 commencement address, Princeton President Christopher L. Eisgruber compared a University education to a “rocket booster for students seeking socioeconomic mobility,” and for Douglas Chin ’83, that analogy is especially apt. The flight-obsessed son of Chinese immigrants, Chin became an aerospace engineer who helped propel—and protect—generations of NASA astronauts.

Chin’s space odyssey started long before he landed at Princeton to study mechanical and aerospace engineering in the fall of 1979. Like his Pan Am mentor, Chin dreamed of flying. But when his eyesight disqualified him from that career path, he applied himself to the science of flight with the hopes of becoming an engineer. At Brooklyn Technical High School, he discovered Princeton University at a college fair and applied.

Not only was he accepted, but any barriers to enroll were removed by a generous aid package that included the Rudolph Zinsser Memorial Scholarship. “It was never a question of not going because of finances — thanks to Princeton's assistance,” Chin says.

Princeton sometimes felt like another planet for Chin, at least socially. He experienced a culture shock, as he initially struggled to find his place on campus and within its Asian-American population, which was made up of its own slices of socioeconomic diversity. But he eventually found balance, taking photographs for the Bric-a-Brac, socializing at Charter Club, and immersing himself in his studies.

“At Princeton, I learned to socialize with others of different backgrounds,” Chin says. He leaped at the opportunity to interview Apollo astronaut Pete Conrad ’53 for Princeton Engineer magazine and was inspired by his academic advisor Robert Stengel *65 *68, who designed the manual guidance code for the Apollo Lunar Module program. “All I could think about were spaceships,” Chin says.

He landed after graduation at Rockwell International, the Californian aerospace contractor that built Endeavour and other space shuttles for NASA. Just 21 years old, he suddenly found himself living his dream, working alongside astronauts and the pioneering Apollo scientists who put a man on the moon. He was among geniuses, and in many cases, legends.

So it took some courage for the “new kid” to speak up about a possible error that the rest of NASA had overlooked since the very beginning of the shuttle program. “We would do hundreds of flight simulations where I would be staring at the readings and saying, ‘Okay, this is normal… this is normal,’” says Chin, who sat next to the astronauts in the cockpit.

But he noted that the meter that measured the gravity-force felt by the astronauts flashed every time it inched past 3G. “I would ask, ‘What’s that?’ and they said, ‘Not a problem — it’s the backup flight system anyway,’" Chin says. A mentor, however, wasn’t so sure. “‘Doug, you found something — maybe,’” Chin remembers his colleague telling him. “‘You should check this out.’”

He spent hours after work poring over microfilm and learning how to read code. He double-checked the data and triple-checked. And he wasn’t wrong. It was an error, a coding glitch in the system that needed to be fixed immediately. At the next flight readiness review, where a room of mission management runs through a checklist and each department signs off with a verbal-Go for-launch, Chin was heralded as the whiz kid who solved a problem — before it became a real problem.

Chin has spent the last 35 years thinking deep about space, working with NASA as an engineer for Rockwell, McDonnell Douglas, Hughes Space and Communications, and Boeing. He co-piloted the simulator as NASA prepared for some of its biggest launches, including the first mission following the 1986 Challenger disaster. 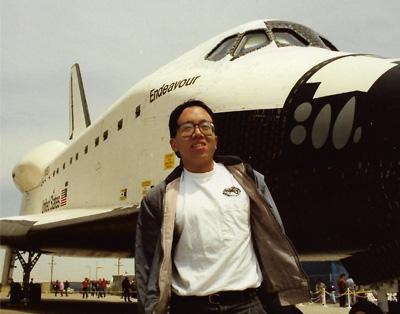 “It was really quiet in that cockpit,” Chin recalls. “You can see the intensity in the astronaut, Bob Cabana, making sure that everything looked perfect. And that sweeps everybody up. This is just not a normal simulation. We love our flight crew. They’re all family. And we're getting ready to re-fly a national asset.”

Today, as a senior engineer for Northrop Grumman, Chin works on space systems. He misses the thrill of working on the shuttle program (though he makes up for it as a licensed private pilot): “All the alumni of the space shuttle program, we definitely look back upon those days as probably our best in our careers. We knew we were making history.”

Chin hasn’t given up on spaceships. We’re on the cusp, he believes, of another golden age that will be driven by private-enterprise exploration led by Blue Origin, Virgin Galactic, SpaceX and other companies. “We’re getting ready to possibly fly back to the moon, to go to Mars, so we're actually at a very exciting time right now,” he says.

It’s also an exciting time to be a Princeton alum. About 10 years ago, settled in Southern California with his wife, Grace, and two young children, he reconnected with his alma mater and became a leader in the Asian American Alumni Association. It was a homecoming of sorts that encouraged him to reflect on his Princeton experience and examine how he can play a role in helping students thrive at the University. His reengagement coincided with Princeton's concerted effort to expand its socioeconomic diversity and enhance opportunities for FLi (first-generation, low-income) students, not only with financial assistance but with on-campus programs. In the past decade, the percentage of Princeton students that receive federal Pell Grants has tripled to 22 percent, and 17 percent of the Class of 2021 are among the first from their families to attend college. In addition, 60 percent of current Princeton undergraduates receive financial aid, and more than 80 percent of recent seniors graduated debt-free.

Chin is determined that students with diverse backgrounds have the same opportunities he did. His education, which previous Princetonians helped make possible, transformed the trajectory of his life and that of his family. Chin’s son, Doug Jr., is following in his vapor trail, studying mechanical and aerospace engineering, playing trumpet in the Princeton band, and participating in the Rocketry Club as a member of the Class of ’21. It’s impossible not to connect the past with the future. “I think about my ancestors, who were the Chinese workers who built the railroads in the 1800s,” Chin says. “For myself, I worked on a rail system in space.”

And as all serious space aficionados agree, the next generation is the best star trek of all.