From Princeton to Chicago, Morgan Smith ’21 leads through service

Watch the new ‘Dare to Venture’ video to see how Smith is helping others break through barriers.

When Morgan Smith was growing up in the Los Angeles suburbs, her grandfather, who lived nearby, woke up every Friday before the crack of dawn to fill his pickup truck with groceries and deliver them to his church’s food ministry. When Smith was old enough, she and her two sisters would tag along during summer breaks, sorting the produce, watching and learning as their grandfather organized the food distribution to hundreds of families in need.

“What stands out is the cheer that my grandfather brought to the work — how he would greet those who came for food with a wide smile and eagerly insist they take as much food as possible,” Smith said. “He taught me so much about leadership and integrity. When I think of service, I think of him showing us what it means to take the time to help those who are less fortunate.”

It’s early when Smith begins work each morning in Chicago, and the lessons she absorbed from her grandfather and others in her family guide her every day. After graduating from Princeton in 2021, Smith was selected for a Princeton AlumniCorps Project 55 Fellowship. She works as a child representative and minor guardianship program coordinator for Chicago Volunteer Legal Services (CVLS), a pro bono legal aid organization.

From the time she wakes to the time she finally unplugs, she is focused on helping the children who find themselves pulled into the legal system and the volunteer attorneys who represent them. “In cases between parents or guardians related to visitation, guardianship, or custody, our clients are always the children,” said Smith, who shepherds the cases and provides administrative support for the attorneys working pro bono. “I get a visceral enjoyment from knowing that I’m being useful, that what I’m doing is helping someone else.”

Her two-year commitment to CVLS draws on Smith’s experience at Princeton, where she was an active campus leader. “My love for Princeton came through service, whether it was working behind the scenes at events, being a student worker with the Office of the Dean of Undergraduate Students, or even quite literally serving coffee with the Princeton Coffee Club,” said Smith, who became the first Black woman president of the American Whig-Cliosophic Society. She also participated in two Princeton Internships in Civic Service (PICS) projects in the summers of 2019 and 2020 with the Children’s National Health System and U.S. District Court for the Eastern District of New York, and now serves as a University Young Alumni Trustee. “I really began to develop a sense of self through what I can do for others.”

That connection with the University and its commitment to service clicked immediately when Smith bonded with other first-year classmates during Community Action (CA) orientation. “I love engaging with other people, and I met three of my closest friends at CA,” Smith said. “Princeton students are amazing people, and it was wonderful to be able to work with them, get to know them, and call them my friends.” 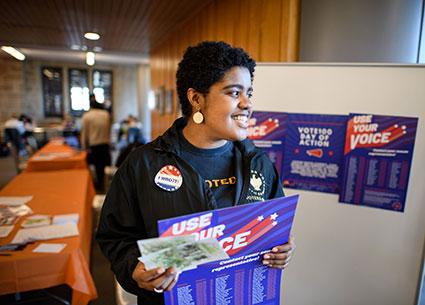 Later, Smith helped spearhead the students’ Vote 100 initiative, an awareness campaign dedicated to urging every Princeton undergraduate to vote in the 2018 and 2020 elections. “When we visited Washington, D.C., Congresswoman Terri Sewell ’86 told me and other students that voting is the cornerstone of democracy, and that resonated with me,” Smith said. “And as a Black woman, voting is not something I ever take for granted.”

Vote 100 was a success, even if it didn’t attain its goal of perfection. More than 75 percent of Princeton’s student body voted in 2020, a 25-point increase from the 2016 presidential election. “Working with Vote 100 made me more excited to get involved with local and state elections,” Smith said. “The past year and a half have demonstrated just how important and impactful work is at local and state levels — who your governor is, how your mayor is addressing all of these issues.”

In addition to the often turbulent national events that occurred during Smith’s undergraduate years, her civic activities combined with classes taught by professors like Eddie Glaude Jr. *97 and Imani Perry to widen her worldview and encouraged her to pursue a law career dedicated to public interest, government and nonprofit work. “Everything that we consider to be great about this country, only certain people had access to it for a long time,” Smith said. “America takes on its own mythos sometimes, and a lot of what we are seeing today is because we have not reconciled that myth with what is actually happening.”

Her drive to be engaged and to find her voice led her to Whig-Clio, the oldest collegiate political, literary and debate society in America. She gravitated towards the Whigs, the liberal wing, but she made it a priority to attend all the Clio events as well. “An organization like this only works when you engage with both sides of the debate,” Smith said. “It’s okay to disagree, but whatever solution you’re working toward, you’re going to end up with a better result by talking it out and understanding where everyone’s coming from. Whig-Clio was really that first place where I could disagree with someone, but not feel belittled either. I felt a wonderful sense of belonging there.”

The empathy and diplomacy that Smith cultivated at Whig-Clio is now an essential part of her professional toolkit at CVLS, where her position puts her in the center of often difficult negotiations. “Anyone going to court over their children, it’s going to be emotionally charged,” Smith said. “I really admire our staff attorneys, who deal with these issues with such nuance, parsing through what is happening in the case with a level head, never wavering from giving their best for the children. I want to approach my work with the same sense of intent, always dealing with people with dignity, no matter how angry or upset they may be.”

Smith’s experiences with CVLS have confirmed her instincts that she wants to attend law school. She views the law as her best path for helping people in need. And being of service to others is not a perquisite of her interests; it is a function of her being — just as it is for her grandfather.

“Whatever I’m able to do today is only because I was shown love and kindness from people who lifted me up,” Smith said. “When I try to do the math and ask, ‘Wow, how did I get here? Why have I been afforded all of these opportunities?’ the only answer that I can arrive to is, ‘So that I can be the best that I can be to help other people.’ It’s my turn to pass that on, to pour into other people so that they’re in position where they can succeed.”

Venture Forward is a mission-driven campaign that is focused on building community and alumni engagement, seeking critical philanthropic support for the University’s highest strategic initiatives, and sharing Princeton’s defining principles — talent and truth-seeking; access, affordability and inclusivity; and service to humanity.

With DNA toolkit, Rob Pringle is learning how to rebuild broken ecosystems

In Kenya and Mozambique, Professor Rob Pringle and his team are using a revolutionary technique called DNA metabarcoding to analyze animal diets so they can better understand complex ecosystems and how to help sustain them.

Mona Singh is tailoring tools to crack the cancer code

Mona Singh is a professor of computer science and the Lewis-Sigler Institute for Integrative Genomics. Her groundbreaking research into how proteins interact could have enormous ramifications for the study of diseases, in particular cancer. ​

After thriving as a first-generation student at Princeton, Kelton Chastulik ’21 is back in his hometown — Chambersburg, Pennsylvania — guiding high school students towards their own dreams.