Inspired by the beauty of giant manta rays, Olivia Kusio ’21 spent her summer working to protect a vulnerable species by educating fishing communities in Peru and helping them adapt to dramatic climate change.

The majestic leviathans with the otherworldly silhouette coast gracefully through an underwater landscape. In high definition, the movie scene could almost be confused for some alien world conceived by the Hollywood mind of Ridley Scott or James Cameron. But as Olivia Kusio ’21 watched the documentary about manta rays, she was inspired to seek a summer Service Focus project based somewhere in the depths off the coast of Peru.

Kusio, whose concentration at Princeton is in environmental engineering, came closer to that vision this summer through an Office of International Programs internship with Planeta Oceano, a nonprofit dedicated to conserving coastal and marine environments. “Planeta Oceano spearheaded the effort to have a Peruvian law protecting manta rays, so that was part of the reason that drew me there,” she says.

Giant manta rays, graceful kite-shaped ocean gliders that can grow up to 23 feet from wingtip to wingtip, have become a vulnerable species due both to overfishing — their meat and gill plates are a delicacy in Asia — and being inadvertently tangled in fishermen’s nets.

Conserving aquatic life, and addressing the degradation of the environment through climate change, doesn’t have to be at odds with people’s livelihoods, however. “The people who are most aware of these issues are those who are being affected by them the most,” says Kusio, who simultaneously worked with Connecting Schools, a youth leadership program that helped develop and mobilize a global network of environmentally passionate young people. “Communities living in the rain forest or coastal areas see that there are changes in the environment and they know there’s something wrong.”

On her arrival in Lima, the Peruvian capital that is home to more than a third of the country’s population, Kusio was assigned to a team that was designing a marine education center in Zorritos, one of the northern fishing villages where manta rays remained an integral — albeit outlawed — part of the declining marine economy.

Planeta Oceano’s goal is to educate fishers about manta conservation and the long-term advantages of ecotourism for their families and communities. Instead of hunting manta rays, they can become tour-guide ambassadors for the regal marine giants.

“We worked on creating the exhibition, thinking about ways we could facilitate interaction between tourists and the local fishermen and students,” Kusio says. “We also planned a space for scientists to come and do their research, as well as places for workshops for the local people. It was kind of a cultural center.”

Kusio also traveled to rural parts of Peru that were facing increasing hardship due to jarring environmental change. “We met with rain-forest communities that had gone from hunting endangered animals to practicing ecotourism,” Kusio says. “What they really needed was a tool that would help them see an alternative. And that tool was education."

Flowing in All Directions 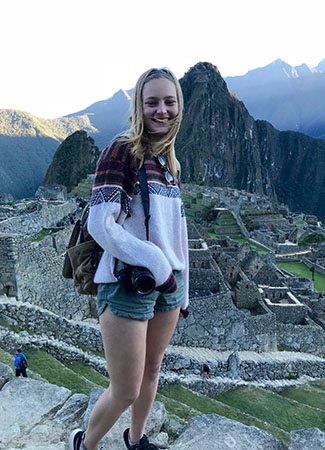 As she and her colleagues met with community members, knowledge flowed in both directions. “In terms of making an impact in people’s lives, what’s most important is to listen to what people want before thinking of a solution or deciding how to tackle a problem,” Kusio says. “They know their issues and they have their own aspirations. I can work on a project that can help create a change, but if communities and people aren’t willing to work with that and adopt it, then you can forget about it.

“It’s no longer just about solving an issue with the environment — it’s about getting together with communities that can help support it and protect it.”

Kusio, who lives in New York City and had never visited South America before, loved her experience in Peru. “It was every single kind of environment pieced together into one country — you have the desert, you have the mountains, you have glaciers, you have rain forests,” she says. “Every city has a completely different environment, and the diversity of the natural environment created so much diversity in terms of community development and community culture, from their legends to their traditions.”

She has one regret about the summer, but it is one that will ensure her return to Peru. Kusio’s work and travel schedule were so packed that she missed out on her opportunity to meet the giant manta rays up close. “We were supposed to go on a tagging trip on our last weekend, but we weren’t done with our projects, so I didn’t get to go,” Kusio says.

“I hope to return to Peru one day and see them for myself — and maybe visit the center we designed.”