Riding the TigerTransit bus was always one of the highlights of Vinny Wagner’s day. Each morning, he jumped on the Princeton shuttle on Nassau Street for his commute to the Princeton Plasma Physics Lab on the far side of Route 1. A 23-year-old student at Palm Beach State College, Wagner had landed a coveted internship at PPPL for the first few months of 2018, and every day, twice a day, while the bus rumbled down Washington Street, he stared out the window at the august stone towers that rise through the campus treeline. He watched as the Princeton students ambled across Washington on their way to classes. He imagined their classrooms, their professors and their conversations.

“I could be one of them,” Wagner thought. The dream seemed literally close enough to touch, just on the other side of the glass. Yet so far away.

Princeton was a dream, but Wagner already had traveled thousands of miles and navigated numerous obstacles just to reach Palm Beach State, a community college less than two miles from his home in Lake Worth, Florida. When he was 13, he and his mother had moved from Florida to her native Brazil, where they lived for eight years.

His bedroom in São Paulo had been spartan by American teenager standards, but his mother filled his room with books. “They were all of one subject: books to make you enthusiastic about science,” Wagner said. “Like books by Michio Kaku: ‘The Future of the Mind’ and ‘Physics of the Future.’ Those books were kind of my inspiration.”

Wagner was an outstanding candidate for college. He’d done well as a student in Brazil, even though he hadn’t spoken a word of Portuguese when he arrived. He taught English at a local school, too, and right after graduation in 2013, he spent a year in Russia, teaching English while he learned yet another language.

A university education is free in Brazil, and Wagner was torn about whether to enroll there or apply to the more expensive colleges in the United States. An alarming incident helped him make up his mind: armed burglars broke into his house when he was home. “That was a very scary moment: men with guns in the house,” Wagner said. “I wasn’t hurt, fortunately, but it was kind of like the last straw for me.” 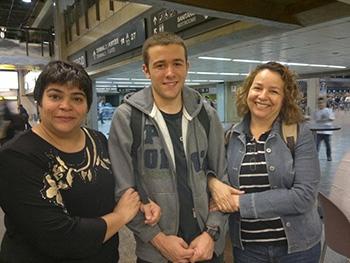 Arriving back in the U.S. in 2015, Wagner hoped to enroll at the University of Florida, where he’d recently been admitted. But while he had lived in Florida for most of his life and recently become an American citizen, he had been reclassified by the college as an international student, pushing the price of tuition beyond his family’s means.

College would have to wait, so Wagner got a job at Target to help pay his family’s bills and sock away some savings for the next admissions cycle. If Target was his full-time job, researching colleges became his part-time gig. Wagner spent hours online, researching hundreds of universities and their financial aid programs. The next year, he applied to about 10 highly-competitive schools that offered to meet a student’s full financial need. “I had one mantra: I only need one ‘Yes,’” Wagner said.

He didn’t get it. He was rejected at every school to which he applied. “I knew those schools were selective but I think I may have underestimated how selective,” Wagner said.

Unwilling to give up his dream and reluctant to delay for another year, Wagner enrolled at nearby Palm Beach State. He excelled immediately, scoring straight As. But at 22, he was impatient, and after just one year of community college, he filled out another fleet of applications to transfer to a four-year college. He poured his soul into his application essays, sent them to another 10 schools, and waited again for that one life-changing “Yes.”

“I got rejected everywhere,” Wagner said. “I started to get a little bit disillusioned. But I didn’t give up.”

Instead, he Googled the words, “community college internship,” and a link to a program in the U.S. Department of Energy popped up. “The great thing about the program is you can choose any lab from any of the Department of Energy labs throughout the country, and it just turns out the Princeton Plasma Physics Lab is one of them,” Wagner said.

Wagner applied to the internship and was accepted. He moved to Princeton in the spring of 2018, and for 16 weeks he juggled online classes from Palm Beach State with his new responsibilities at PPPL. “I was tasked with creating this device that would help with science education related to plasma physics,” he said. “I learned to solder things, to put things together, circuitry — all that fun stuff. It was a great first internship.”

For once, Wagner’s timing was perfect. A few months before he began his PPPL internship, Princeton officially announced that it would reinstate its transfer program and accept applications for the first time since 1990. Those twice-a-day bus rides through campus had lodged Princeton in his heart and Wagner submitted his transfer application.

In the meantime, he bolstered his academic bona fides, winning a prestigious Undergraduate Transfer Scholarship from the Jack Kent Cooke Foundation and accepting another internship at California Institute of Technology. But after so many previous rejections, he had learned to keep his hopes in check.

Princeton’s transfer program was revived in order to increase undergraduate diversity, with an emphasis on students who are from low-income backgrounds, who have served in the military or who began their studies at community colleges. More than 1,400 students applied to the program, and the admissions office selected only 13.

One of them was Vinny Wagner.

“I looked on the website and it said, ‘Congratulations,’” Wagner said. “I was just speechless. I didn't know what to feel at that point. My mother had been working at the time. I called and told her and she yelled out in joy. It was an incredible and emotional day, the culmination of that entire college-seeking journey.”

In September 2018, Wagner moved into Whitman College and joined the great Class of 2021. While most of his new classmates and their parents unpacked SUVs full of supplies on move-in day, Wagner arrived with just a small suitcase and backpack. He took his time finding his way to his new home, soaking up the surroundings. “I could’ve just checked the map for my dorm, but I didn’t want to,” he said. “I wanted to get lost on campus. I just wanted to walk around, and it was incredibly emotional.”

Once the semester began, he stood out as an older student with some life experience under his belt. “A lot of my Whitman friends came to me looking for advice about things,” Wagner said. “These are incredibly bright people, but they’re experiencing this thing — being away from their parents — for the first time. And I learned a lot from them as well.”

Academically, Wagner gravitated towards computer science, specifically cybersecurity. “Ever since I got into computers when I was younger, cybersecurity has interested me,” he said. “It’s a field that has a very large, very steep learning curve, but fortunately, here at Princeton, I had the opportunity to learn more about it. And it’s a very fun field.”

For his senior thesis, Wagner is building a portable network router that will protect users’ identities and information even when they’re using Wi-Fi in public places. “It basically tunnels your connection to your home network using a virtual private network (VPN),” said Wagner, who also launched Princeton’s first student cybersecurity club in the midst of the pandemic and is hoping to attend graduate school to study cybersecurity. “The idea behind the project is to protect people like journalists, activists or people in countries that have censorship.”

Wagner’s interrupted senior year has been “strange and bittersweet,” due to COVID-19, but he has realized his dream. “I have the privilege to be in a place where I can pursue not only the things that I find myself really passionate about, but I have this possibility to lift myself and my entire family out of poverty,” Wagner said.

“This always blows my mind: It’s less expensive for me to go to Princeton then it was to go to my community college. Every time I think about that, that thought comes around: I’m so, so grateful to be here. I love to remind myself of that all the time.”

Sabrina Sequeira ’21: A Healthy Start to the American Dream

When Sabrina Sequeira ’21 decided to dedicate her summer to helping refugees, she didn't jet to a distant corner of the globe — she took the New Jersey Turnpike home.