When 18-year-old Norman Augustine ’57 *59 arrived at Princeton University, his freshman physics teacher was John Wheeler. By 1953, Wheeler had already helped develop the atomic bomb and co-founded Princeton’s top-secret Project Matterhorn to research nuclear fusion; and he would later coin the term “black hole.” Augustine didn’t recognize the academic celebrity in his midst.

“I had no idea that he was anybody special — just another professor,” Augustine says. “Here you had one of the gods of particle physics, who was not only willing to teach freshmen, but he was obviously excited about it.”

As a teenager in Stockholm, Sweden, Margareta “Meg” Engman Augustine had a remarkable chemistry teacher who changed her life. “She just made it so exciting, like it was opening your eyes to a new world,” she says. “I would’ve loved to have studied chemistry all day long, and I stayed in the lab way after we were supposed to be finished, because we had so much fun.”

The Augustines still marvel at the power of inspiring teachers in their lives. It was the impetus behind their recent gift to Princeton of three endowed professorships in the School of Engineering and Applied Science. Endowed professorships are Princeton’s highest academic honor for faculty members, bestowed on distinguished professors who break new ground in their disciplines and inspire their students.

“There’s no problem getting the best students in the world to Princeton, but you’ve also got to attract the best faculty,” Norm says. “The University competes with a lot of other universities for the cream of the crop, so we saw the need to endow these chairs. It was just the next logical step, to pay Princeton back for what it’s done for us.”

A Fortunate Series of Events

More than 60 years after graduating with a B.S.E. in aeronautical engineering, Norm still credits his Princeton education for so much of the good that came after, which he modestly terms “a series of fortuitous accidents.”

At the top of the list: meeting Meg, who dated Norm’s roommate when Norm was studying for his master’s in aeronautical engineering at Princeton. A few years later, when Norm was working for Douglas Aircraft in California, they reconnected and began a now-six-decades-long romance that has produced two children, three grandchildren — including Bella Alarie ’20, the reigning Ivy League Women’s Basketball Player of the Year — launched travel adventures to 126 countries (and both poles), and made a significant impact on the nation, most notably in Norm’s role as CEO of Lockheed Martin and as acting secretary of the Army. Their contributions continue today with their leadership in efforts to promote education and science, including medical research.

Coming to Princeton was the first of those so-called accidents, an opportunity Norm says was made possible only through a scholarship. He’d grown up in Colorado thinking “going east” meant visiting his aunt and uncle’s farm in Kansas, so initially, Princeton felt almost like a different country.

His initial efforts in the classroom were humbling. “When I came here, the hometown newspaper carried a little article about me, and it said ‘Denver Youth Goes to Princeton,’” Norm says. “When I got my first physics exam back — and my grade was not good — I thought the headline would be: ‘Denver Youth Returns from Princeton.’”

If Norm initially felt uncertain in his new surroundings, Meg practically radiated self-assurance. “I think I obtained a lot of confidence from my father,” she says. “He became president of the company in Stockholm in which he had started as a mail boy.” When Meg was 19, she stunned her friends in Sweden when she announced that she was leaving for a job in the United States. “Everyone else was negative, but my father said, ‘You have to follow your passion. My love for you is always there … and you can always come home.’”

Norm and Meg married in 1962, just as Norm’s career began to take off. “There has not been a grand plan,” he says. “If there’s any secret to the life we’ve lived, when opportunity knocked, we did answer the door.” Between 1965 and 1977, Norm served two stints at the Pentagon, culminating in his role as acting secretary of the Army during the Ford Administration.

When he returned to the private sector, he joined Martin Marietta and helped them navigate the changing landscape of the aerospace and defense industry after the fall of the Berlin Wall. In a period of five years, approximately 70 percent of defense companies ceased to exist as the Cold War thawed. “It was a great occasion for the world, but a difficult time for the industry,” Norm says. “But as with all times of change, there are also opportunities.”

Norm helped engineer a merger with the Lockheed Corporation in 1995 and became president and soon CEO of the new Lockheed Martin. He found himself among friends. “When I was CEO, almost the entire aerospace industry was led by people with Princeton degrees,” Norm says, citing colleagues at competitors like McDonnell Douglas, Boeing, Westinghouse, and Grumman.

“Other schools produce great engineers, just as Princeton does. But I think studying engineering at Princeton produces a different kind of engineer: I learned to write, and very few engineers that I’ve run across in life can write,” he says.

Norm has written four books, including Augustine’s Laws, which captured his dry wit and business philosophy, and produced a book of his photography. Norm also served as president of the Boy Scouts of America and chairman of the American Red Cross. Since retiring from Lockheed Martin in 1997, he’s accumulated multiple awards and honorary degrees, taught at Princeton, served on corporate boards, and led a number of presidential and congressional commissions. 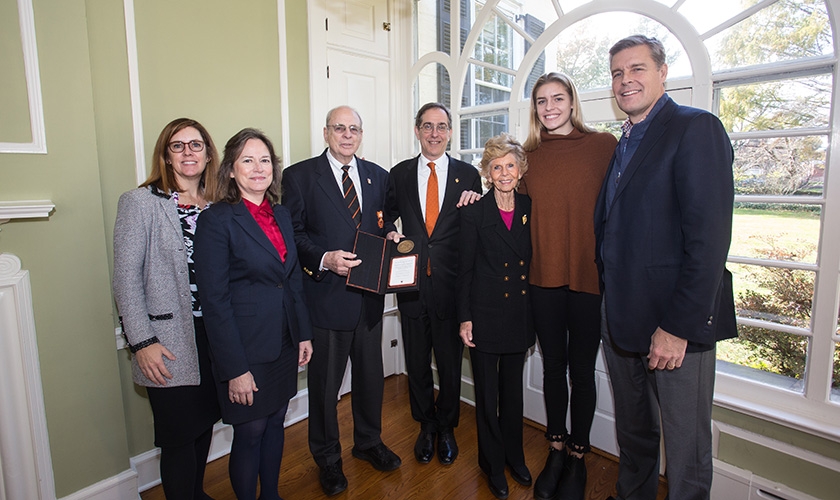 Investing in the Next Generation

In 1998, Norm served on the Hart-Rudman Commission, a bipartisan group established by the U.S. Congress to make recommendations on how best to secure America in the future. “Everybody thought we were going to say that what we need is X more carrier-battle groups, Y more infantry divisions, and Z more air wings,” Norm says. “Unanimously, we came back and said that the two most important things we can do are improve education and invest in research.”

A major focus for the Augustines’ philanthropy is to improve STEM (science, technology, engineering, and math) education for elementary and junior high school students. “If you have a teacher who has a passion for math and science, then kids get excited about it and they want to learn more,” says Meg. “Starting with younger children can make all the difference.”

The three Princeton professorships — named for the Augustine family, Norman R. Augustine ’57 *59, and Margareta Engman Augustine — will support leading research and inquiry, and will help train the next generation of engineers and problem solvers.

The Augustines identify climate change, health care, job creation, and infrastructure as four key areas that require scientific and technological solutions. “If you need clean sources of energy, who do you go to? You go to engineers and scientists to develop them,” Norm says. “You can go on down the list with other critical problems that face us, and it’s amazing how many of them require engineering for at least part of their solutions.”

The gift of professorships is also deeply personal to the Augustines. Princeton is the place that transformed him, Norm says. “A lot of people talk about college being the best four years of your life,” he says. “I wouldn’t say that exactly. My recollection is that it was maybe the hardest four years of my life in terms of work. But I have such great affection and respect for this place, in terms of what it does. I owe it a great deal.”

“I don’t think you can find any other place in the world like Princeton,” Meg adds. “There is some magic here that you don’t find anywhere else.”

Paula Chow has dedicated her career to the Princeton University community, co-founding the Davis International Center in 1974 and serving as its director for 35 years. In September, the University named historian Michael Laffan the inaugural Paula Chow Professor of International and Regional Studies.

A new professorship of Indigenous studies, endowed by a $5 million gift from Wendy Schmidt and her husband, Eric Schmidt, a 1976 alumnus, will build on Princeton’s interdisciplinary strengths and expand its faculty expertise in an area of study that is critically important to the University.

Princeton University has established an endowed fund with a gift from Currie C. and Thomas A. Barron that will significantly increase support for environmental research related to biodiversity and build upon the University’s decades-long leadership in studying and protecting the rich variety of Earth’s ecosystems.