Tom Barron ’74: Rewriting the Future of Our Planet

The long walk to the school bus never really bothered Tom Barron ’74. It was a solid mile from his front door to the highway, connected by the dirt road that crossed a creek, wound its way around ponderosa pines and through the meadows of his family’s ranch near Colorado Springs. In the distance loomed Pikes Peak, and all around him was the natural beauty of the West.

Some mornings, he’d look up to discover a herd of pronghorn antelope — hundreds of them, peacefully grazing as close as 20 paces away in the meadow, as if he and they had an unspoken arrangement. When he wasn’t running late, he’d linger to observe them — to marvel at their elegance and the perfect balance of the world they seemed to share.

“The sight of pronghorns pulled me out of my young head and into something much grander,” Barron said. “Watching them, so wild and free in that wide-open landscape under the boundless blue sky, I myself felt bigger and freer.”

When change came, however, it came fast. Development in and around Colorado Springs exploded in the late 1960s, around the time Barron left for his freshman year at Princeton. When he returned home during vacation breaks, he was stunned to discover new strip malls and parking lots that seemed thoughtlessly scattered around. The landscape was carved up, and the graceful pronghorns stopped paying Barron visits.

“It went from that kind of wonderful Big Sky region with roaming animals, creeks and a lot of open spaces to endless urban sprawl, because the politics of that particular area were resistant to any sensible controls on growth,” Barron said. “It actually makes me so sad that I can’t bring myself to go back there anymore. It hurts my heart. But it made me a lifelong conservationist. I began to see that if we valued those places and those creatures, we needed to make commitments ahead of time before habitats like these were devoured by development.”

Today, Barron is better known by readers as T. A. Barron, an award-winning and internationally bestselling author of novels and children’s books, including the fantasy adventure series “The Merlin Saga,” currently being developed into a Disney movie. In 2011, he was awarded the de Grummond Medallion for “lifetime contribution to the field of children’s and young adult literature.” Read any of his 31 books, and you will discover two recurring motifs. One, nature is depicted as an active character with a distinct history and personality. And two, every single person can be a hero who makes a difference in the world around them.

These themes have molded Barron’s life and inspired him to become a passionate and persuasive advocate for the environment.

Barron learned to appreciate nature and the importance of standing up to defend it at an early age. As a child in rural Massachusetts in the early 1960s, before his family moved west, he was one of thousands of Americans who wrote letters to Congress urging them to oppose a proposal to flood the Grand Canyon and make it a giant reservoir — a campaign that ultimately proved successful and preserved one of nature’s most iconic landmarks.

For the past 40 years, Barron has been a leading voice for The Wilderness Society, which is dedicated to the protection of natural habitats and federal public lands, and he has also been active with organizations such as Earthjustice, World Wildlife Fund and Wildlife Conservation Society.

Tom and his wife, Currie, support the University and HMEI’s commitment to an interdisciplinary approach to environmental topics as fundamental to its research and teaching methods. In particular, they view the humanities as essential to achieving long-lasting environmental solutions.

The Barrons have played a critical role in supporting Princeton’s program in the environmental humanities, establishing full and visiting professorships in Humanities and the Environment. They have also created a freshman seminar in environmental writing.

“We are never going to triumph over the challenges that we face for the environment unless we can tell better stories,” Barron said. “We need to reach people in ways that go beyond the science. The atmosphere, the oceans, the forests: All of those are going to be saved only if we understand that the Earth itself is a great story, a story that includes us. We need to tell that story in a much more compelling and inspiring way.” 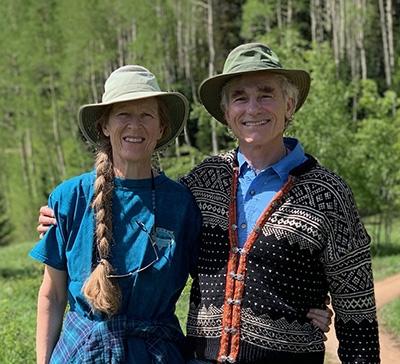 The Barrons recently furthered their commitment to Princeton’s environmental initiatives by establishing an endowed fund for biodiversity research. The Thomas A. and Currie C. Barron Family Biodiversity Research Challenge Fund, based in and overseen by HMEI, will support faculty and students who pursue research critical to preserving species and ecosystems.

“When you lose biodiversity, when you pluck out strands of the complicated web of life surrounding us, that can require 100 million years of evolutionary time to repair,” Barron said. “Every species has the right to live. On top of that, when we harm other species, we also often harm ourselves. Think for a moment about what our lives would be like if we had no pollinators. That would devastate our fruits, our trees, and our global supplies of food, as well as our spirits. So the declines in honey bees and monarch butterflies, which are terrible losses by themselves, are also great losses to humanity.”

FALLING CLOSE TO THE TREE

Barron may have mastered the art of storytelling, but the craft didn’t always come easy for him. At Princeton, he was an exemplary student, winning the M. Taylor Pyne Prize and a Rhodes Scholarship. Before finishing his program at Oxford, he travelled around the world while writing a novel he thought might launch a successful career as an author.

“That manuscript got a terrific reception,” he said with a smile. “I sent it out to 36 publishers, and during the course of just one term at Oxford, I got 36 rejections. It was a unanimous verdict: Go do something else.”

So he did. He completed his studies at Oxford, earned M.B.A. and law degrees from Harvard University, and embarked on a successful career at a private equity investment firm in New York City. “That was a great experience in many ways — fascinating people, interesting puzzles to solve, big stakes in making the right decisions,” said Barron, who served as president and chief operating officer of his publicly-traded company. “But the truth is, for me, that work only used a small part of my brain and none of my heart.”

What kept his heart pumping was writing. The best part of his days, he discovered, were the quiet hours after he awoke at 4:30 a.m., during which he would scribble down creative ideas, stories, poems and character descriptions at his kitchen table. Just for fun.

“I clearly had a passion for it because even in the face of all those rejections, I was still making time for it,” Barron said. “There was so much meaning and so much joy for me in the craft of writing that I had to take it seriously.”

Barron was nearly 40 and married with two young children when he found himself contemplating leaving the safe, well-trodden path of success to try again for a literary career. He didn’t have to fall far from the tree to find the courage to make that leap. 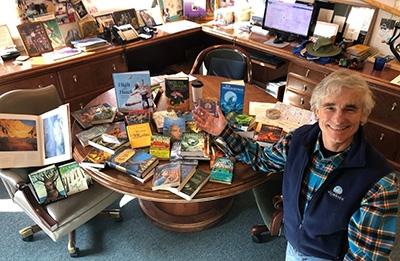 He remembered when his mother, Gloria, decided to become a geologist when she was nearly 60 years old. She was sitting in the kitchen, staring out the window at Pikes Peak. “She pointed and said, ‘You see that mountain? Well, that really is a book. It has its own story to tell. And I am going to learn how to read it.’”

Barron watched as she talked her way in to Colorado College, became its first continuing education student, learned organic chemistry and trigonometry to qualify for core classes, and ultimately pursued a master’s degree in geology. She used that training to teach natural sciences to deaf and blind children for the next 20 years.

“I was blessed to have a mother who was very much a nature spirit as well as a dedicated teacher,” Barron said. “Her decision to tackle a whole new field at that age showed me that all we have that really matters is our time and our souls. So why not make the most of them? What is life about, if not to try to be all we can be in the brief time we have?”

In 1990, Barron left his New York firm, moved his family back to Colorado to focus on becoming a full-time writer, and published his first novel, “Heartlight.” In 2001, he established the Gloria Barron Prize for Young Heroes to identify outstanding young leaders age 8-18 who have made significant contributions in their communities or to the environment. 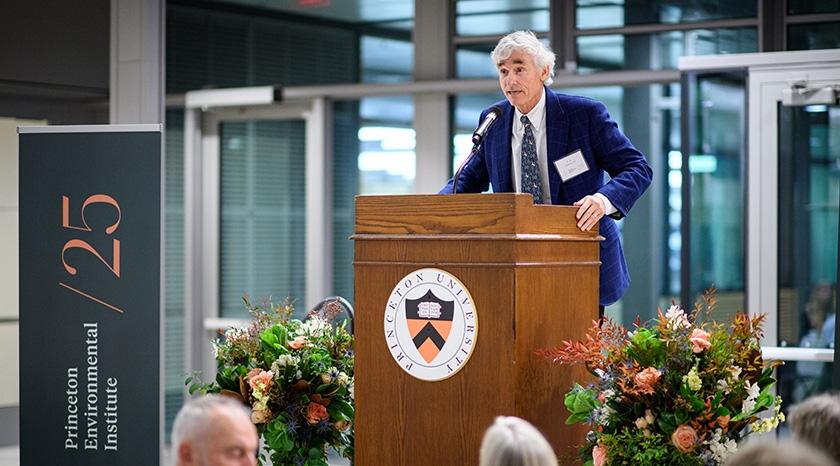 When Barron was 30, he was invited to join the board of The Wilderness Society after he’d written an editorial in The New York Times that criticized the Reagan administration for planning to sell the country’s public lands to drilling and mining interests in order to pay off the national debt. At his first meeting, he realized he wasn’t just the board’s youngest member — he was the youngest member by a wide margin.

Many of his colleagues on the board had been involved for decades. One of them was Ernest Griffith, a World War I veteran and former member of the Princeton University faculty. More than 50 years older than Barron, Griffith welcomed the newcomer with the same warm greeting he said he and his fellow doughboys had received as they marched into Paris near the end of the war: “Fresh troops have arrived.”

Barron now looks around with pride and excitement at the next wave of “fresh troops” who are rallying to save the planet — especially at Princeton, where environmental studies are recognized as a top priority and a new generation of students arrives with awareness and a sense of urgency about climate change.

“President Eisgruber has raised the bar for Princeton to draw on the strengths of many interdisciplinary fields to help us answer these very big questions,” Barron said. “You need the sciences to explain the world, you need the humanities to tell the story, you need the engineering to build a better future, and you need the policy expertise to propose ways that we can actually live sustainably.”

COVID-19 has disrupted every aspect of society, and its further impact still looms. But Barron hopes that a lesson for the environment may emerge from the ravages of the pandemic.

“I think the most important lesson of this whole COVID experience is that we are all connected,” Barron said. “This is a virus that spread throughout humanity and has reached countries of every description and every geographical location. We human beings are very good at building walls that separate ourselves, but the virus has shown that we are all part of the same environment. We all live under the same atmosphere. We all need clean water, breathable air, and access to nature. If we can listen to our higher angels, we can save our fellow creatures as well as ourselves.”

A Vermont farm forced Carl Ferenbach III ’64 to look at nature in a whole new way, and his quest for answers about the environment led him to partner with Princeton, a relationshp that has resulted in the High Meadows Environmental Institute.

Repaying a Debt to Princeton—and to the United States: Fernando L. Aenlle-Rocha ’83

Fernando L. Aenlle-Rocha ’83 is so thankful for the “remarkable gift” of his Princeton education—and the generous financial aid that made it all possible—that he designated Princeton as the beneficiary of a portion of a trust he established in his will.

Robert D’Acquisto’s estate plan provides for Princeton, with funds earmarked for initiatives that promote college success. “These programs exemplify how I want to give back,” D’Acquisto says of his decision to join the 1746 Society by including Princeton in his will.