Sitting in her new Princeton dorm room in the late summer of 1977, C. Kim Goodwin ’81 is already laser-focused on her future. She’s eager to get to work, building upon the lessons and experiences she’d encountered at her private high school in Ohio, where she had been one of the first women and few students of color. That prep curriculum had prepared her well academically, but she harbors some doubts, absorbed from teachers who made her wonder whether she would be a welcome addition to an elite Ivy League school. She is a first-generation college student, enrolled at Princeton with the assistance of generous financial aid, work-study money, and Pell grants.

She reaches for the welcome-to-Princeton pamphlet that rests on the desk in her dorm room, and leafs through it. A particular story immediately catches her eye.

“I was flipping through the brochure that all the freshmen receive, and I see that a recent Pyne Prize winner was a Latina from the Bronx,” Goodwin said. “Like me, she wasn't what was regarded at that time as the typical Princetonian. That was so inspiring to me.”

The ‘Latina from the Bronx,’ of course, was Sonia Sotomayor ’76, the distinguished alumna who would one day become an associate justice on the Supreme Court of the United States.

Across campus, another student found inspiration in the then-recent alumna as well. José Figueroa ’81 heard about the path of excellence that Sotomayor had blazed. Like her, he’d gone to high school in the Bronx; his family also hailed from Puerto Rico.

“I had zero information about Princeton other than there was a cartoon ‘Flintstones’ episode where Fred was enrolled at Prin-stone University,” he said. “But when I was on campus for the April hosting weekend for prospective freshmen, Sonia was talked about in awe-inspiring ways, especially among the Puerto Rican students. She was spoken of with pride.”

More than four decades later, Figueroa and Princeton trustee Goodwin, who are married to each other, are part of a group of alumni who have partnered to celebrate Justice Sotomayor’s inspiration and achievements, with the Sonia Sotomayor 1976 Scholarship Fund. The scholarship is awarded to first-generation college students who have demonstrated a commitment to service.

When Sotomayor was at Princeton, she was a leader of the Latino Student Organization and sat on the governing board of the Third World Center (since renamed the Carl A. Fields Center for Equality and Cultural Understanding). She also organized Latino students as volunteers at the Trenton Psychiatric Hospital to provide Spanish-speaking translation for patients.

Since graduating, Sotomayor has maintained a leading role in the Princeton community, serving as a trustee before her appointment to the Supreme Court in 2009 and returning to campus on numerous occasions as a guest speaker. At Alumni Day in 2014, upon receiving the Woodrow Wilson Award (below), she credited the University with instilling a commitment to service within her, and suggested broadening Princeton’s informal motto to “the service of humanity.” Her words subsequently were combined with Wilson’s about Princetonians being “in the nation’s service,” and immortalized in a stone medallion installed on the front lawn of Nassau Hall. 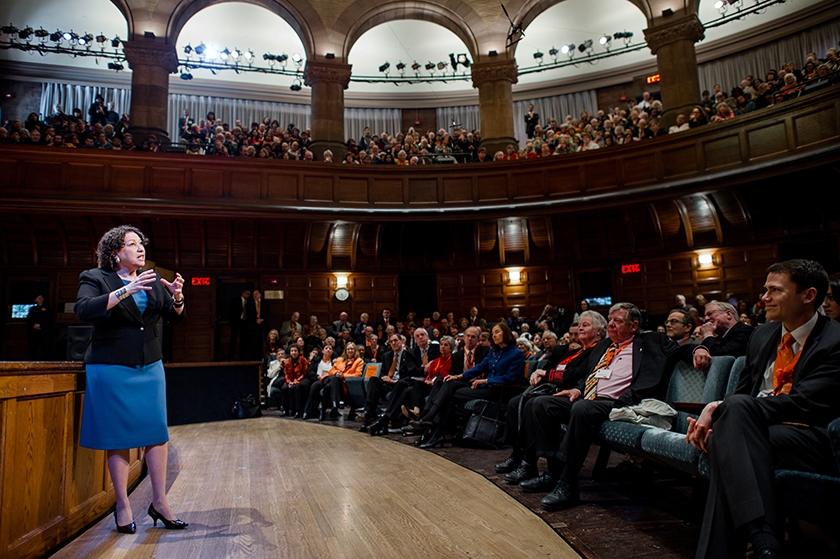 Although Justice Sotomayor is not involved directly with this scholarship, those who created it wanted both to honor her and carry forward her legacy of service to the next generation. “There was this opportunity to honor someone who has done so much for so many people,” Goodwin said. “In this way she has become a symbol of what we want to accomplish and an example for the students that are potential beneficiaries at Princeton.”

Goodwin got to know Sotomayor when both served as Princeton trustees prior to Sotomayor’s nomination to the Supreme Court. They bonded over their shared undergraduate experiences as co-chairs on the governance board of the then-Third World Center, which served as both a social hub and training ground for a generation of leaders from diverse backgrounds.

When the University and alumni volunteers organized the 2017 ¡Adelante Tigres! conference celebrating Princeton’s Latino alumni, securing Justice Sotomayor’s participation was a priority. She didn’t disappoint, engaging in a sparkling conversation with Margarita Rosa ’74 at Richardson Auditorium.

“It was really emotional,” Figueroa said. “There were quite a few young teenagers there, listening to Justice Sotomayor offering these words of wisdom and encouragement. When it comes to the question-and-answer period, these kids—who have probably never spoken in public before—just naturally gravitated toward the microphone and began asking her questions.

“The warmth and intimacy that Justice Sotomayor brought to the keynote event was a testament to the fact that she was a trailblazer and that she has this ethos of leaving no one behind. That sense of compassion carried through after the conference so that a handful of alums wanted to honor her legacy.”

Figueroa and Goodwin forged their own legacy of achievement and service. Figueroa worked in advertising, earned a law degree, and runs an independent digital film production company. Goodwin is the former managing director and head of equities for Credit Suisse Asset Management and currently sits on several boards, including PineBridge Investments and Banco Popular de Puerto Rico.

In early 2017, Goodwin and Figueroa moved to Puerto Rico, where they established Avanico Holdings, an investment startup dedicated to improving life on the island. “We were persuaded that we could actually make a difference, not just with the startup, but being part of a concerned community where folks want to move themselves forward,” Goodwin said. “And that’s been fantastic.”

Just months after they moved to Puerto Rico, the island was pulverized by Hurricane Maria. Justice Sotomayor, who had extended family in the path of the storm, helped set the tone for the effort to rebuild. “For the people on the island, I want you to know that you are not alone,” she said in a recording released days after the hurricane. “Through our ability to work hard, the Isla del Encanto will be reborn as a beacon of hope. Puerto Rico will not only survive this. It will bloom once again. My beloved Puerto Rico, I embrace you with love and hope.” 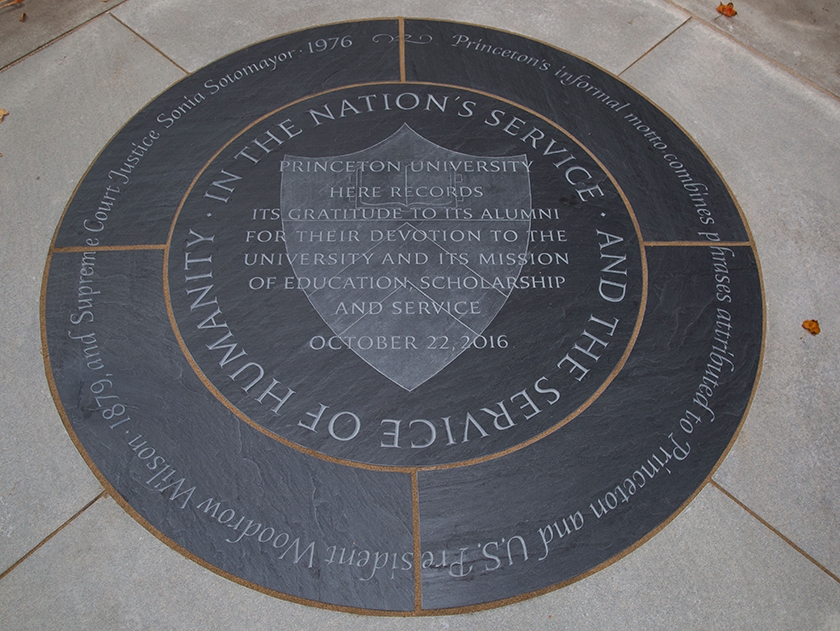 By then, the seeds of a Sotomayor Scholarship had already begun to blossom. Figueroa conceived the idea more than a decade ago, and the stars aligned to make it a reality. Several University trustees stepped forward to contribute.

“This was a collective effort,” Goodwin said. “Many of us are first-gen, some of us are of color, and some of us are married to other Princetonians. But it's really gratifying that even though we all come from different backgrounds, we came together around this.”

Goodwin and Figueroa imagine that current and future generations of Princeton students will be just as inspired by Justice Sotomayor’s achievements as they were. In time, there will be multiple Sotomayor Scholars on campus, as well as others who become alumni who are in a position to make a difference themselves. “We have such high hopes that they're going to accomplish a great deal and that they want to make positive change—not just for themselves and for their families but for others,” Goodwin said.

For Figueroa, sweet justice looks like this: “I hope to see a scholarship recipient have one of these scholarships named after them.”

The Gilbert S. Omenn, M.D, '61 and Martha A. Darling *70 Fund for Grand Challenges in Bioengineering will allow the recently created Princeton Bioengineering Initiative to move rapidly on several fronts, including hiring post-doctoral investigators, seeding research and starting a series of lectures on technical and societal frontiers of bioengineering.

Lydia and Bill Addy ’82 made a major gift to name a dormitory in one of the new residential colleges being built on campus. "Princeton made a difference in my life and as the University expands, I’m excited that more students will have their own Princeton experience," said Bill Addy.

Paula Chow has dedicated her career to the Princeton University community, co-founding the Davis International Center in 1974 and serving as its director for 35 years. In September, the University named historian Michael Laffan the inaugural Paula Chow Professor of International and Regional Studies.